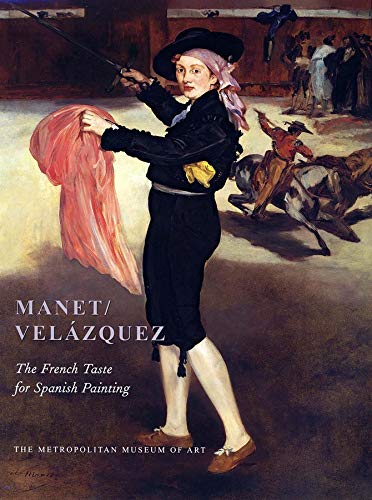 Señales de uso. Ligera mancha en el corte. En Inglés / In English. Catálogo / Catalogue. Tinterow, Gary, and Geneviève Lacambre, with Deborah L. Roldán, Juliet Wilson-Bareau, Jeannine Baticle, Marcus B. Burke, Ignacio Cano Rivero, Mitchell A. Codding, Trevor Fairbrother, María de los Santos García Felguera, Stéphane Guégan, Ilse Hempel Lipschutz, Dominique Lobstein, Javier Portús Pérez, H. Barbara Weinberg, and Matthias Weniger (2003). " This sumptuously illustrated book accompanies a groundbreaking exhibition—the first of such scale and depth to be organized around the subject—that traces the roots of Modernism in mid-nineteenth-century French Realism. In 1804, at the dawn of the French Empire, there were not more than a handful of Spanish paintings in public collections in France. During the course of the nineteenth century, however, French collectors and museums assembled substantial holdings of works by such Spanish masters as El Greco, Zurbarán, Velázquez, Murillo, and Goya, while French writers and artists—among them Hugo and Baudelaire, Géricault, Delacroix, Millet, Courbet, Degas, and especially Manet—came to understand, appreciate, and even emulate Spanish painting of the Golden Age. Here approximately tow hundred works by French and Spanish artists chart the development of this cultural influence and map a fascinating shift in the paradigm of painting, from Idealism to Realism, from Italy to Spain, from Renaissance to Baroque. Above all, these images demonstrate how direct contact with Spanish painting fired the imagination of nineteenth-century French artists and brought about the triumph of Realism in the 1860s, and with it the foundation for modern art. American painting between the Civil War and World War I reflected a keen appreciation of contemporary French styles, and as there was a great deal of Spain in the art of Paris, Spain appeared in American art as well. Four major artists—James McNeill Whistler, Thomas Eakins, William Merritt Chase, and John Singer Sargetn—epitomize the American enthusiasm for and appropriation of Spanish styles, largely under French influence, between 1860 and 1915. A number of American artists traveled to Spain for firsthand exposure to the country, its people, and its artistic heritage and contributed to the intense Hispanisme—or fascination with Spain—that engaged international artists and writers during the period. A broad selection of American works, exhibited only in New York, reveals the pervasive influence not only of French painting but also of the French taste for Spanish art as well. The nineteenth century also witnessed the formation of two great cultural institutions, the Musée du Louvre in Paris and the Museo del Prado in Madrid. The interwoven histories of these renowned depositories, including the political upheavals and vicissitudes of collections that were assembled and disassembled, which so influenced their growth, are explored alongside the cultural phenomenon of Spanish influence."