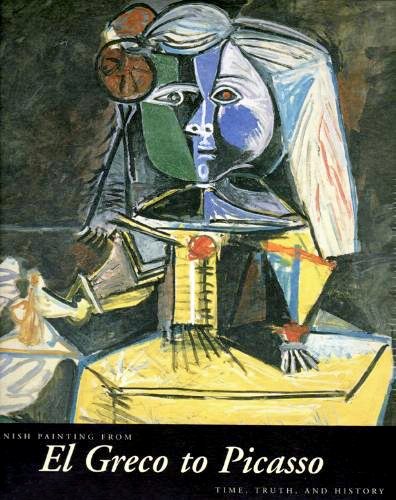 Cubiertas algo deslucidas (roces, señales de uso). En Inglés / In English. Catálogo / Catalogue. With 202 illustrations. "Spanish Painting from El Greco to Picasso: Time, Truth, and History [Pintura española de El Greco a Picasso: el tiempo, la verdad y la historia] brings together for the first time works by the great Spanish masters of the 16th through the 20th centuries: Francisco de Zurbarán, Diego Velázquez, Bartolomé Esteban Murillo, Francisco de Goya, Juan Gris, Salvador Dalí, Joan Miró, and many others, as well as El Greco and Pablo Picasso. Unlike other overviews that display paintings in a strictly chronological order, this exhibition is broken into fifteen distinct sections, each based on a theme running through the past five centuries of Spanish culture. These thematic axes highlight affinities between the art of the old masters and that of the modern era, and challenge conventional art histories that would seek to separate them. Accordingly, works from different periods appear side by side within each section, offering often radical juxtapositions that cut across time to reveal the overwhelming coherence of the Spanish tradition. Until recently art historians bracketed Spanish painting between El Greco and Goya, maintaining that 20th-century avant-garde movements such as Cubism and Surrealism—both of which were pioneered by artists of Spanish origin—broke completely with the traditions that preceded them. Today we have sufficient historical perspective to see that, despite their revolutionary aesthetic leaps, the great artists of the early twentieth century were nourished by traditional models that were, furthermore, local in character. These models found their source in the Spanish School of the late-16th and 17th centuries, an era commonly regarded as the Golden Age of Spanish painting. The aesthetic styles developed during these years—from the visionary opulence of El Greco to the intimate naturalism of Velázquez—dominated artistic production in Spain throughout the following two-and-a-half centuries, as the nation’s imperial power declined and Spain became increasingly isolated internationally. Even Goya, arguably the greatest Spanish painter of the 19th century, could break free from his forerunners only by looking them square in the eye; as the French romantic poet Théophile Gautier observed, “In his desire for artistic innovation, Goya found himself confronted by the old Spain.” By the late 19th century, following Goya and the spirit of romanticism, a national critical conscience had awoken in Spain’s artists and intellectuals, but the country’s antiquated political, social, and economic structures largely thwarted this modernizing impulse. This began a long period of exile or simple emigration, which marked the careers of all the 20th-century masters exhibited here. During this time many stereotypical treatments of recurring subjects that had formed in the wake of Spain’s Golden Age were cast in a new light, as Europe rediscovered the art of the Spanish School and began to write its history for the first time. Chief among these characteristics was Spain’s resolute anticlassicism, which was reflected in its timeless customs, its culture, and its art, and which came to be seen as a source of resistance to the overwhelming homogeneity associated with an industrialized, modern world. Thus as Spanish artists stigmatized the ideological clichés of traditional Spain, they also realized that formal innovation could only come if these same aesthetic values were brought up to date. It is this endless return and reappropriation on a formal and iconographic level that binds together the works of Spanish artists, from Picasso, reaching back through Goya, to the masters of the Golden Age. These connections become especially apparent in particular themes of subject matter, whether established genres, such as still life, landscape, or portraiture, or apparently simple depictions of children, nudes, crucifixions, or domestic scenes. Each of these themes originates in the culture of 16th-century Spain, which was especially influenced by the Counter-Reformation, during which the Catholic Church reaffirmed its dogma, structure, and social role in response to the burgeoning threat of Protestantism. Despite this foundation in the past, the themes play out over the ensuing centuries, setting the basic terms for Spanish painting even as historical contexts and stylistic tendencies change dramatically."